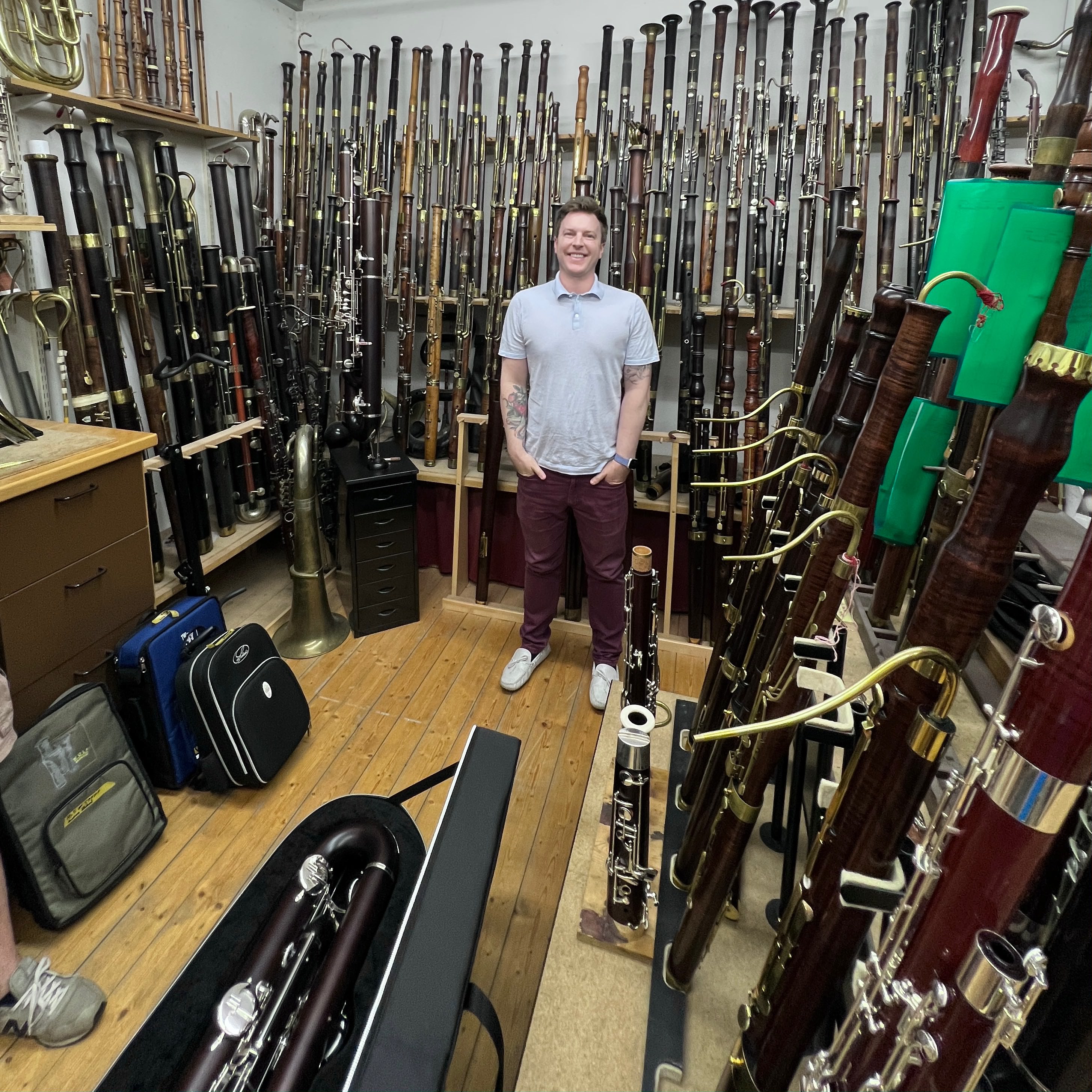 I went to Kronach, Germany to visit the Wolf workshop. It was on a day off between operas at the Wagner Ring festival in Bayreuth which is about a 40 minute drive away. I had made an appointment with Peter a few weeks prior and he was very nice to give so much of his time to talk to me and show the instruments. He had brought the Kronwalt and Contraforte for people to try at IDRS in Boulder, CO this year but I wasnt able to attend. 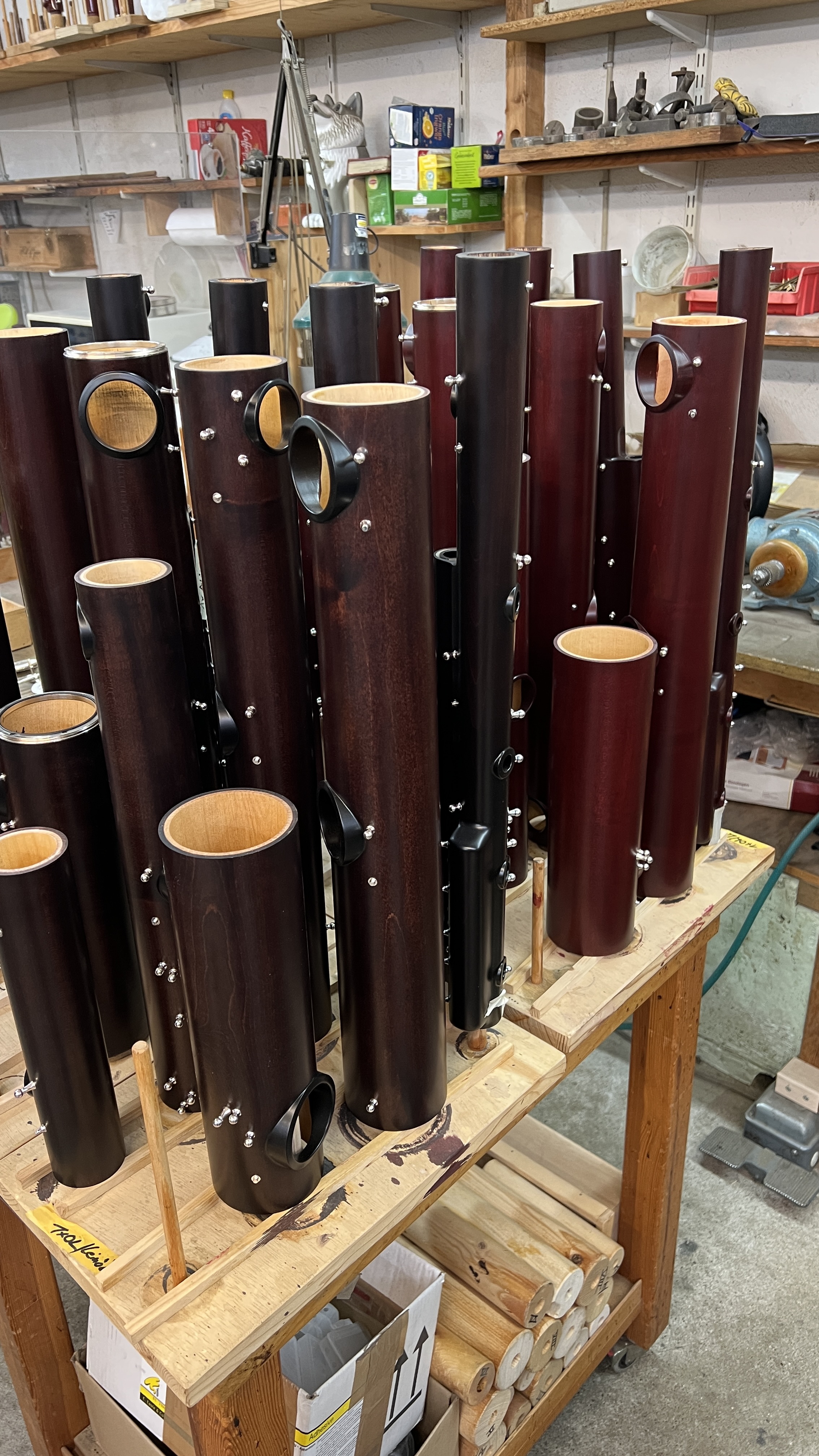 It was interesting to learn that it has become industry standard that the workers who fabricate the keywork work almost entirely from home, in their own personal shops. I always thought they would be in a giant room at work benches along side each other, but the workshop is empty.

The side of the workshop is a room full of historic instruments, prototypes, and examples of current instruments being produced. I was surprised that there were so many pieces of lupophones around the shop, but I think they tried many versions before finalizing the design. And of course the Bassoforte was there which I have been so curious about, although it is dusty, there are recent finger prints on it. So someone had played it, or moved it. I decided not to ask to play it as I was taking so much of his time. Peter said that it doesn’t sound like a bassoon in any way, but it has it’s own voice. And there is not much function for it among bassoon players currently.

The Kronwalt contrabassoon is a modern version of a contrabassoon which does directly follow the path of other contrabassoons. It has a smaller form function by sending the big bend and bell over the front instead of off to the side, and as an option the instrument comes apart into 2 halves for storage in the case. That case for 2 halves is the size of a cheked roller bag suitcase,  and a brand new gig bag has been created which is essentially a slightly taller Kim Walker style drop in case. The divided instrument is an option and doesnt have to be included as a part of the instrument. I was weary of this design because the bassoon has bridge keys connecting the wing joint and boot joint for the low E to whisper key connection. This single bridge key on bassoon is not a good design and goes out of adjustment when the cork compresses, or when the wing joint is assembled at a slightly different angle. Kronwalt has bridge keys which are tenons which slide together. Just as the main body sections slide together, the key bridges have male and female ends which connect, without cork or rubber bumpers.

My first time playing it was not great! I had a Contraforte and currently play on a 1980’s Heckel, and this is not like either of those. I thought the contraforte fingers that I still knew would translate directly, but the CF has an automatic octave key. When pressed the CF octave will open the middle vent when the third left hand finger is down and switch to the upper vent when the third finger is lifted. So on CF tenor C# is always played with lower vent, and there is no choosing otherwise. The Kronwalt has the 2 traditional regular independant vents so if you would like to play C# with upper vent that is easy to do.  So on Kronwalt everything above the staff has options for which vents to open. This basically made Contraforte fingering impossible for me to bring to Kronwalt because on CF I am not thinking of which vents open for which notes, it’s happening on it own. I think with time this will not be an issue. Peter also said that the Kronwalt can be converted to the automatic system at any time.

There is a preliminary fingering chart which at this point extends to G, the space above treble. This is a fifth lower than a CF can play, but he is still getting new fingerings sent to him from players. For me the extreme high register has potentional but I was mainly impressed with the basic scale of the instrument. Just like CF, the Kronwalt has virtually every tone hole fitted with a stack/riser. This allows each individual note to be tuned and voiced and can be changed at any point. This is the direction new Heckel contras have been taking in the last 15 years, although the Heckel tone holes are made of resin. 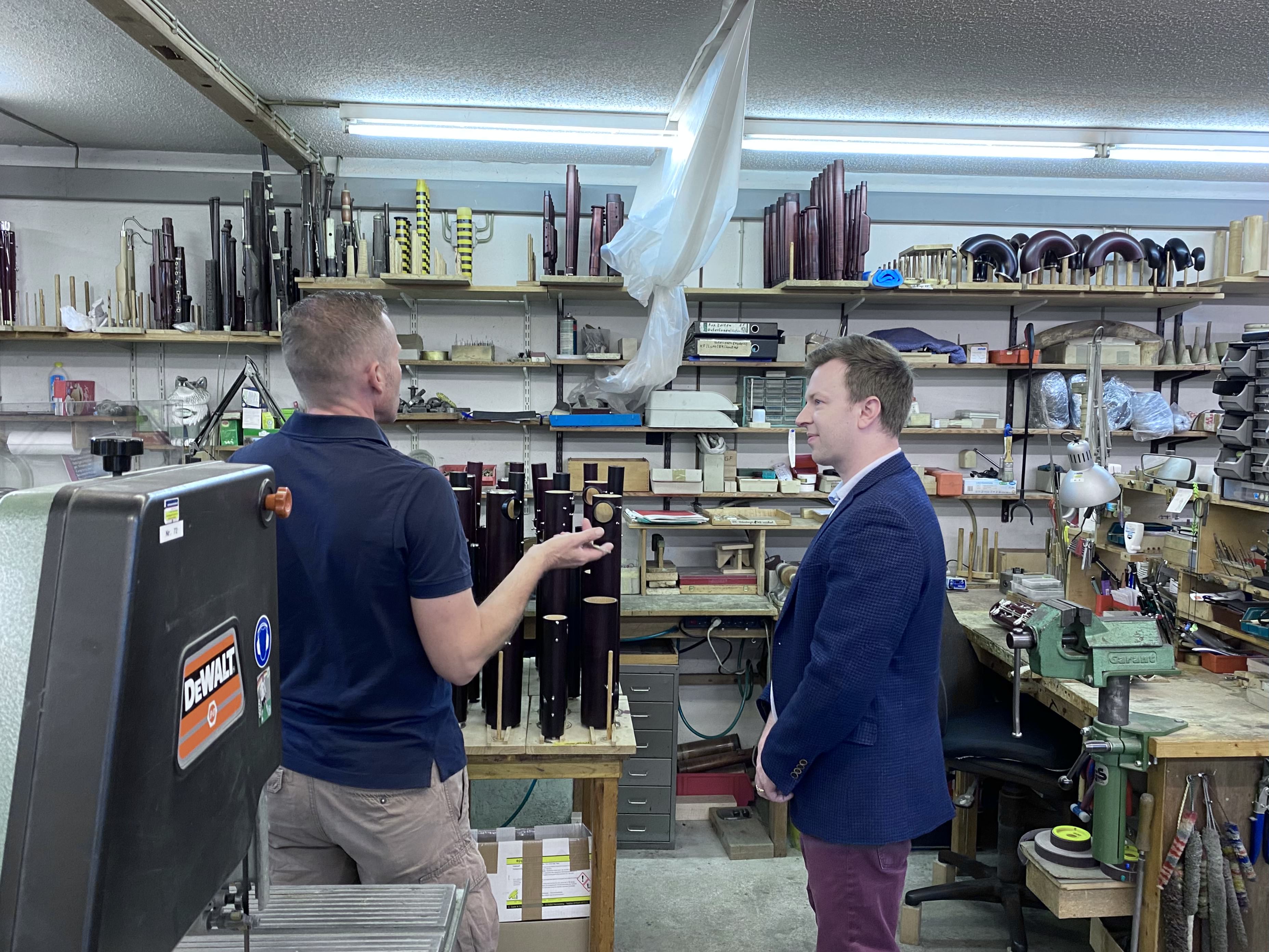 I placed my order, and the plan is to return in a year or so to pick it up. So far they have made 7, and he predicts making 2-3 per year. I ordered the low A attachment although it does not fit into the current case, it would be transported seperately. In my limited time playing a few notes, I preferred the sound with the Bb bell, so I would probably only take the A for specific pieces.

Sundowning II by Lily Chen was written for Keyed Kontraptions in 2018. She based the subject matter on her own personal experience with her grandmother, and the changes that occured with her dimentia. Here is an excerpt from the forward of the piece:

“Sundowning is a neurological phenomenon most commonly seen in sufferers of Alzheimer’s disease. Patients with sundowning usually begin to show behavioral problems after the sun sets. Sometimes they get agitated, restless, or even aggressive; sometimes they suffer from auditory hallucination, illusion, or even delusional disorder. Such syndrome visited my aged grandmother, which put her in a state of mood swings, mental confusion, and cognitive disorder. I found her physical functions obviously degenerating; she even lost her sense of hearing the week before her death.”

My wind quintet, Avenue winds performed a recorded concert at the San Francisco Center for New Music last month. This was a project that was scheduled for the begining of 2020 and due to the pandemic has been delayed for a year and a half. So we were happy that this project came together!

I bought the Maartin Vonk Dutch Leg Stand. I had wanted to try it for years (my high school teacher had one) and I finally found one. They had been out of stock everywhere for a while but now Hodge Products has them for sale. 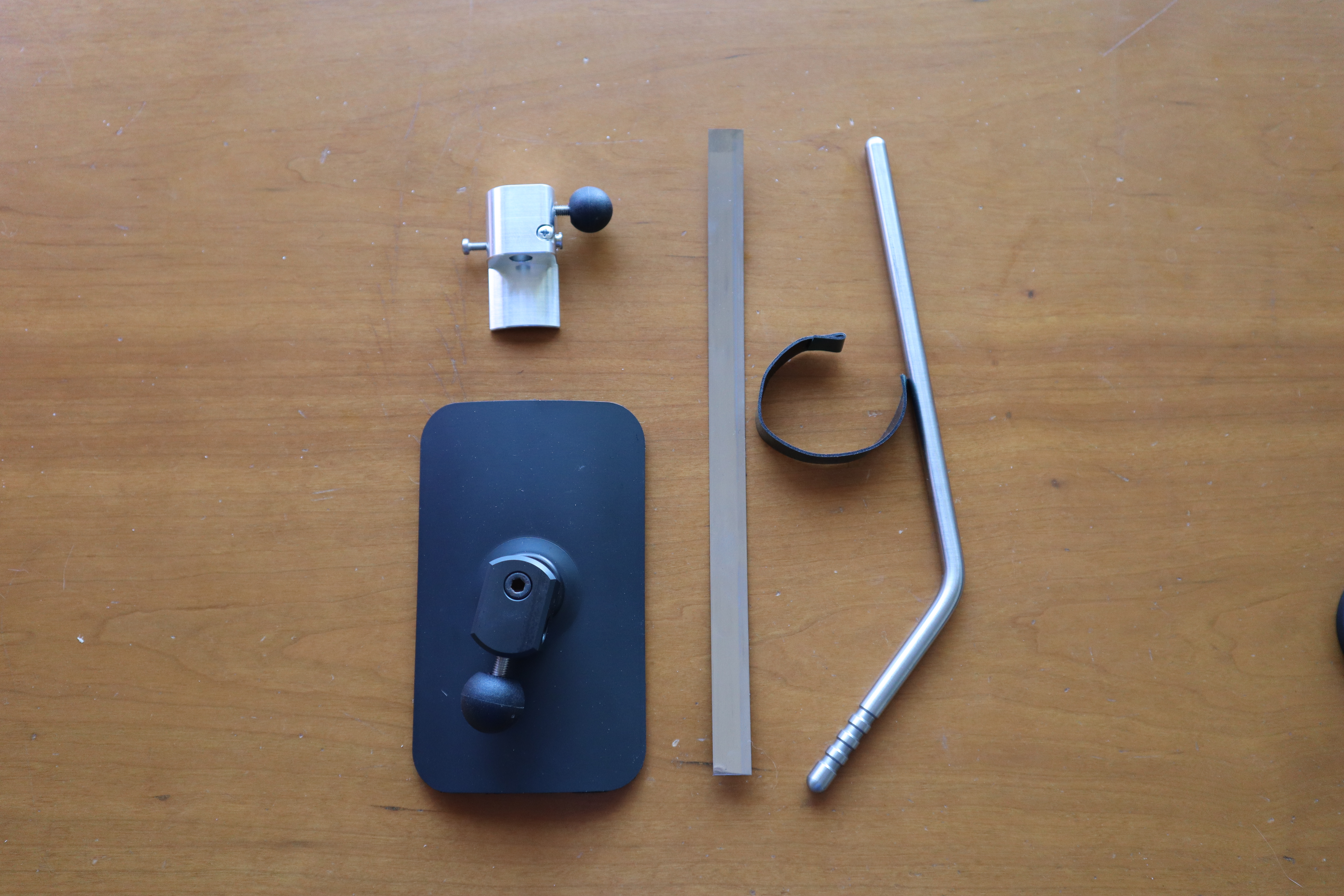 This version is different from the ones I had seen before, the baseplate that rests on your leg is anodized black and the bar that supports it now has preset notches for the adjustment screw to slot into. The strap that holds the support onto the bassoon is made of steel and I initially thought that I would be able to install this myself, but I have nothing at the house that could cut through the steel strap! 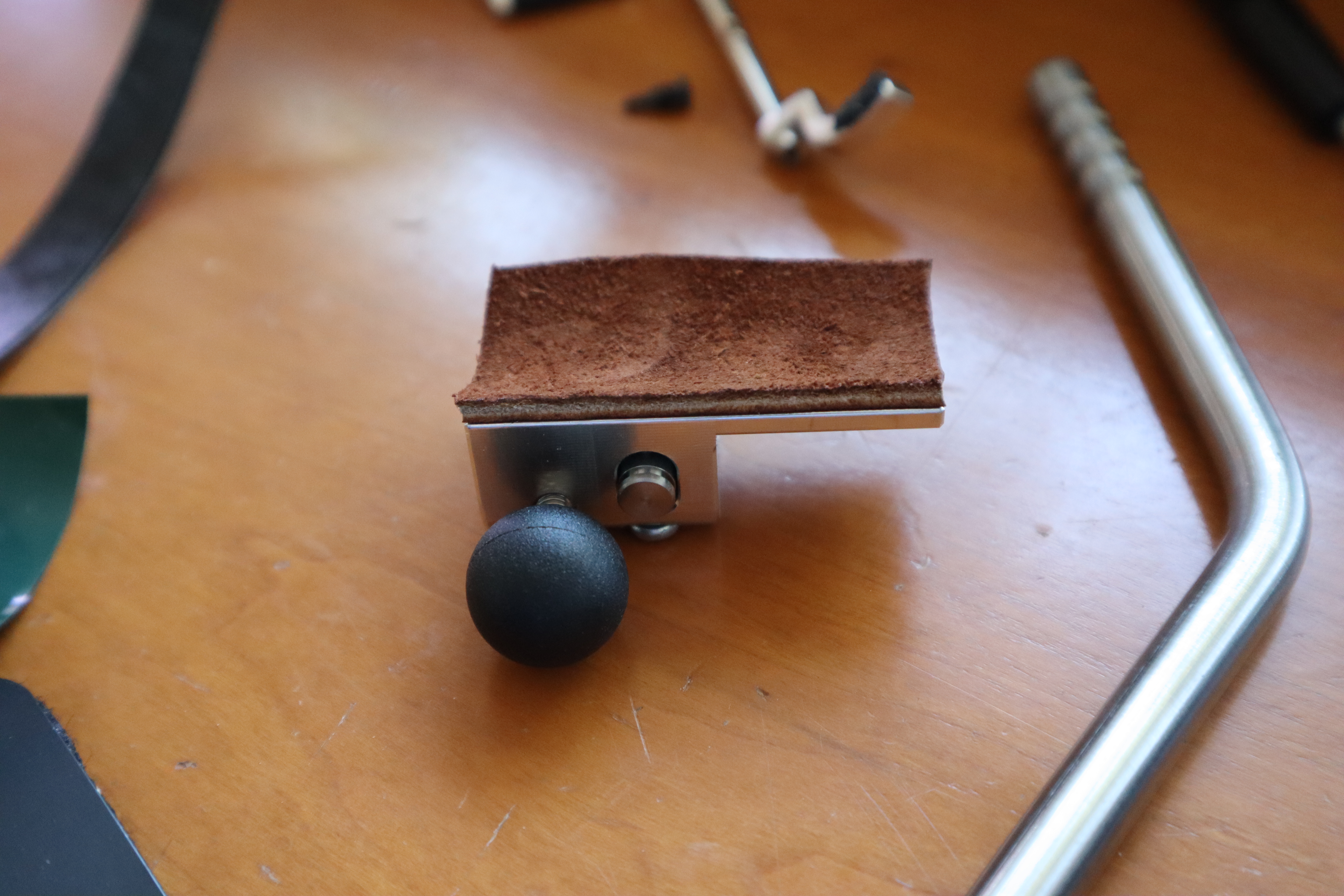 I glued on some leather to this block since it will have so much force rubbing against the side of the boot joint. After I realized that I have nothing to cut or drill the steel, I called Sean Gumin and he did great great job installing it. On Maartin Vonk’s website there is an in depth instruction manual which shows how to measure the length between the cuts and ideas for where to place the strap based on the player’s height. 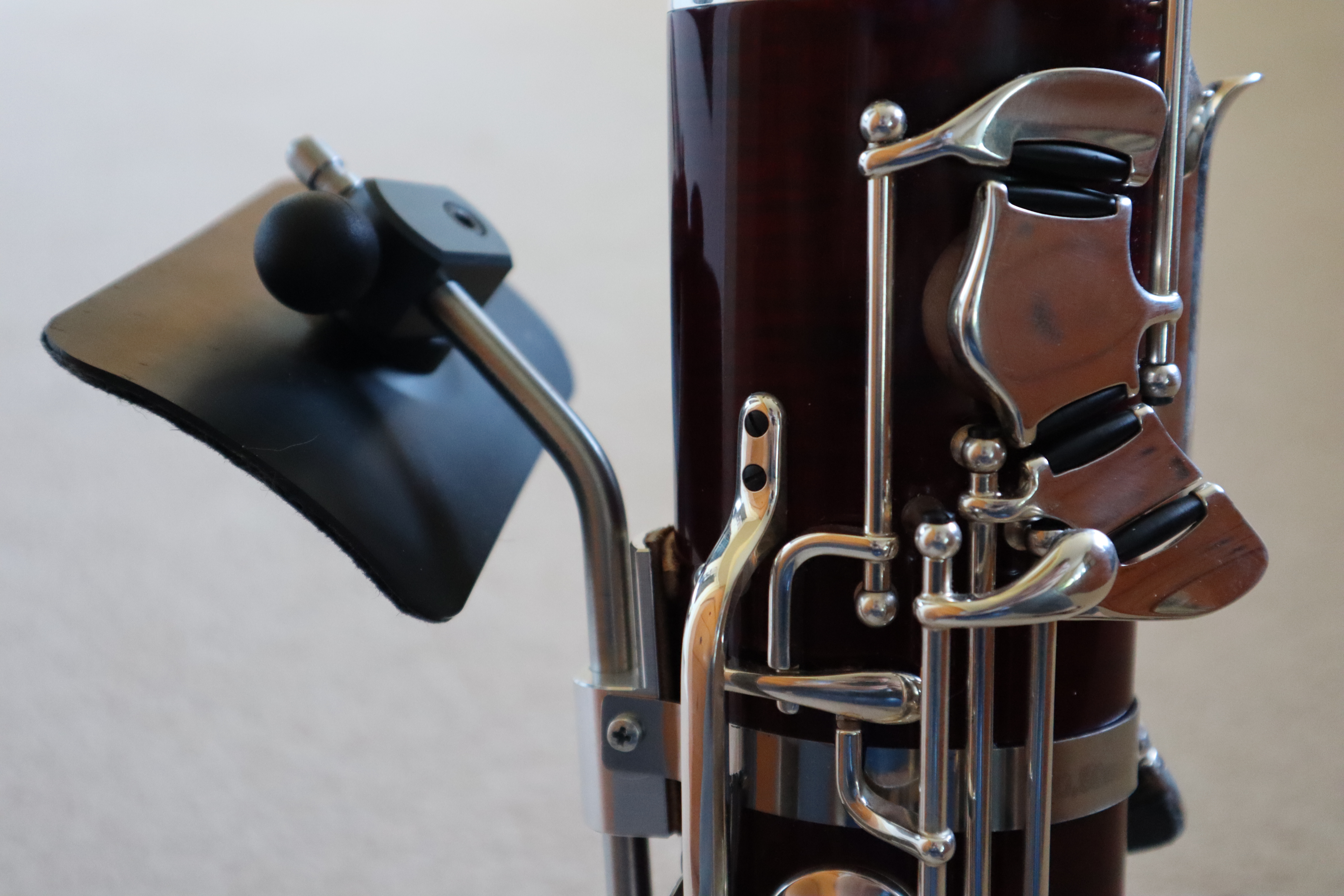 So far I found that my boot joint fits into my bassoon case exactly as it did before, I use a Bonna gentleman cut case. The position of the bassoon seems natural to me and I can still move freely, unlike when I use a peg like on contra. It also takes some of the weight off of my left hand. This might make switching between bassoon and contra faster.

Heckel Contrabassoon #449 is up for sale at Aria Double Reeds. It has a low C bell and a metal low A bell. 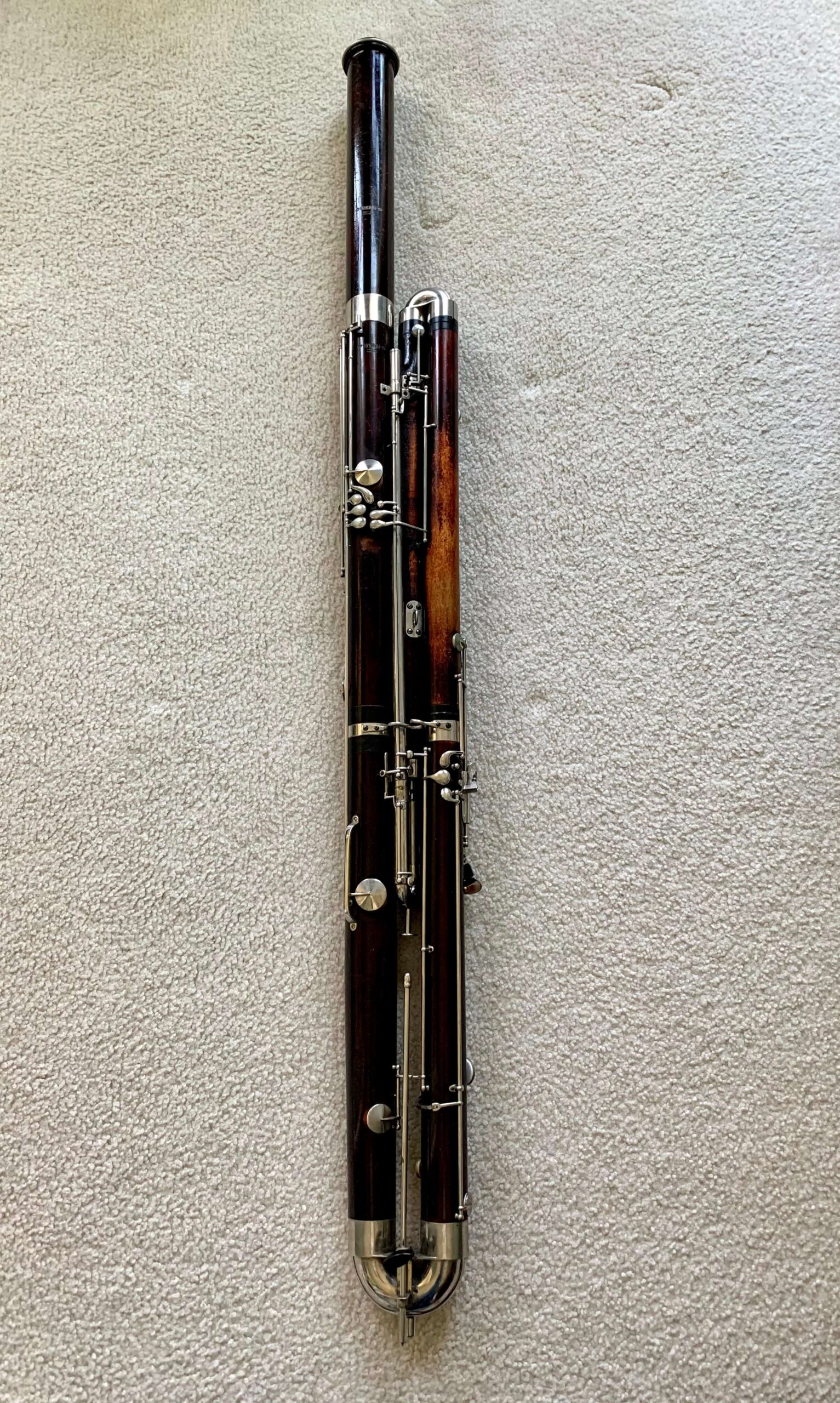 I was looking to try a Takeda Bassoon, which has been hard to locate in the USA. In my searching I looked through the Takeda website and I saw that they have developed a new wing joint which is touted to improved air flow and pitch.

Their new system switches front tone holes 2 & 3 and makes them point up the bore. This ends the tone holes in a stretch too wide for a natural finger spread and so keys have been added.

Whenever I play on a bassoon that has the left hand third finger tone hole key added I notice a big improvement in my technique. So I would be curious to see what adding two keys would do.

I did an experiment on a bassoon recently, I painted it! In the beginning of the quarantine I bought a plastic tenoroon from China, it plays well for what it is. I thought I would use it more in arrangements but then it would make the arrangement less accessible for people without a mini bassoon. 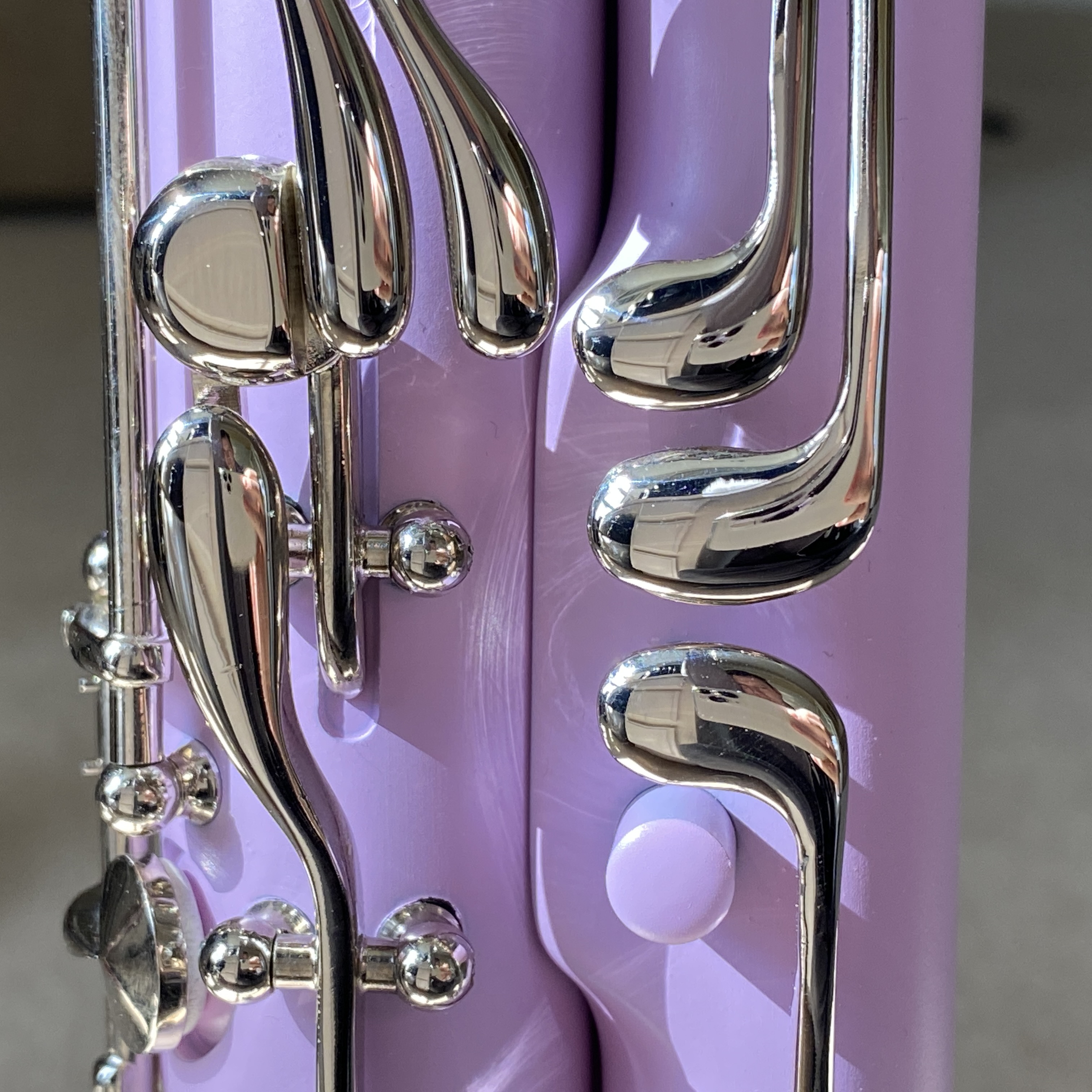 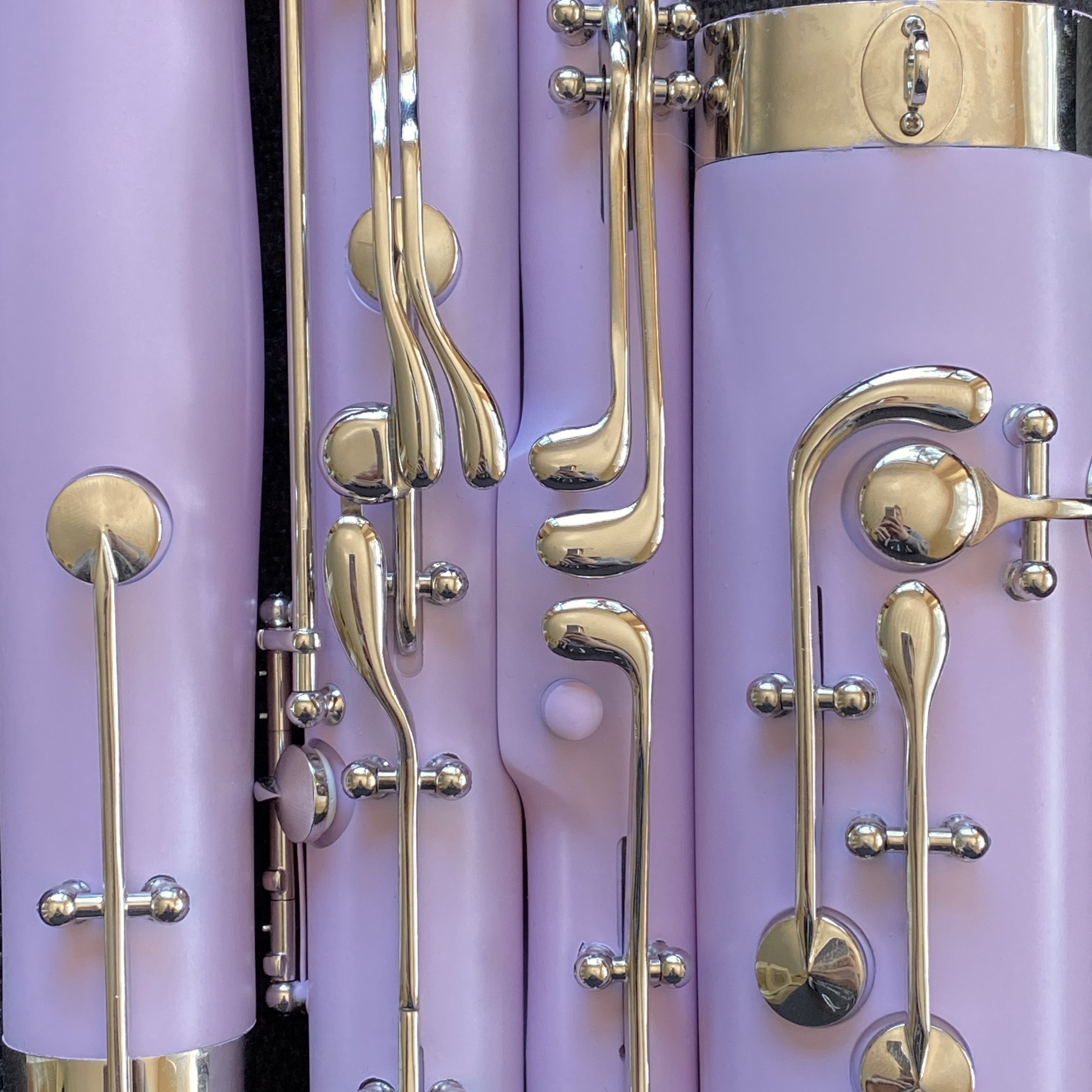 I painted it with a matte lilac spray paint and it came out great, so I decided to do my Linton bassoon also. My Linton sits in my closet now that I don’t teach, and I use it for outdoor evening gigs. For the Linton I used a darker lilac satin spray paint and the resulting finish has a bit more shine to it. 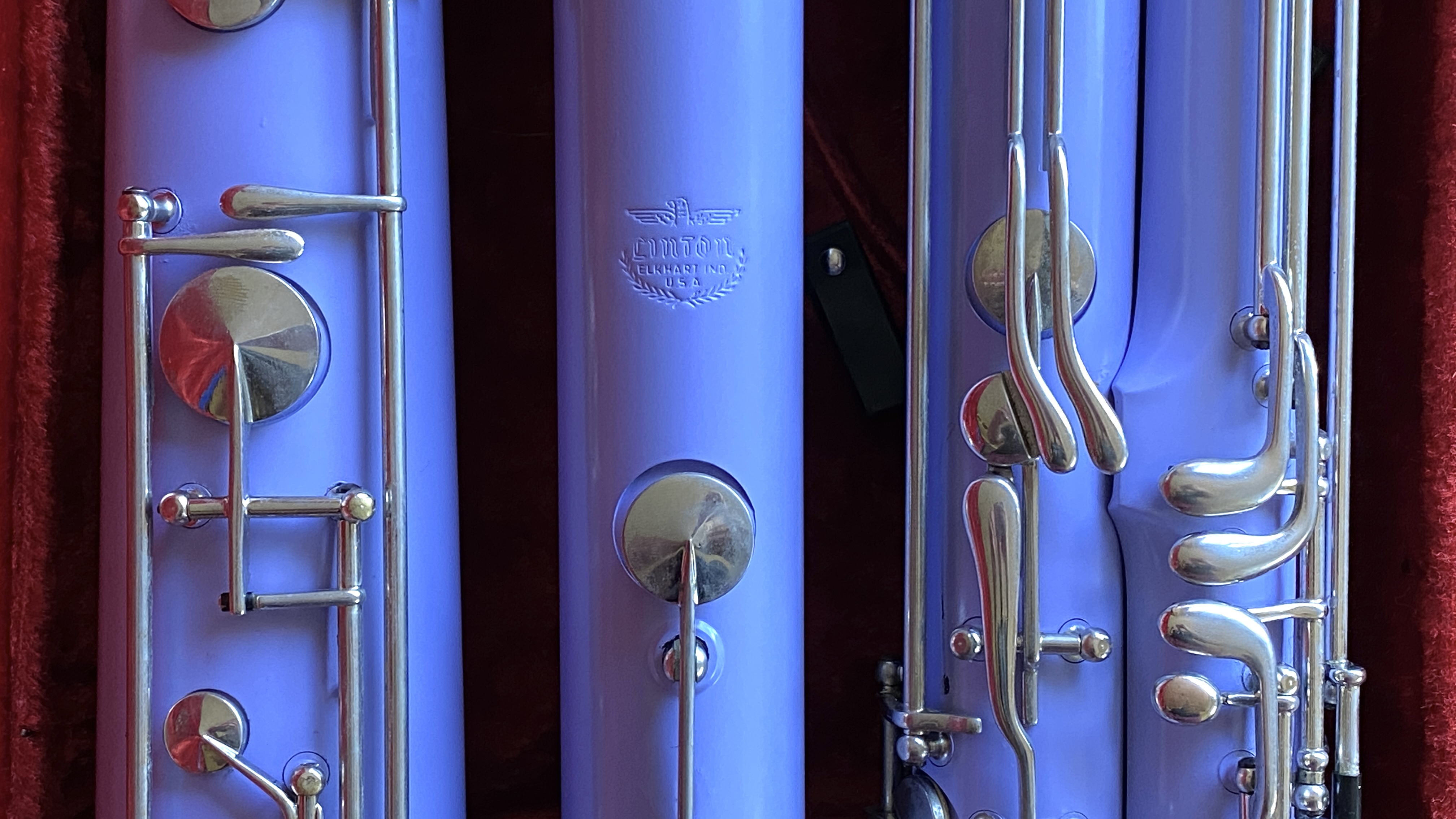 I did an arrangement of Appalachian Spring for bassoon sextet. This took a while to get together but its pretty fun to play.

John Steinmetz wrote Four Signs in 2014 and I was lucky enough to attend the SF Premier with Steve Braunstein and Steve Paulson.

This duet is special because the second bassoon part switches to contra in movements 2 & 4. John also uses a technique in the first movement where the 2 lines cross each other alternating notes, this effect doesn’t come through clearly in the recording but in a live concert hall it creates a really satisfying sound.

Buy the duet at www.trevcomusic.com